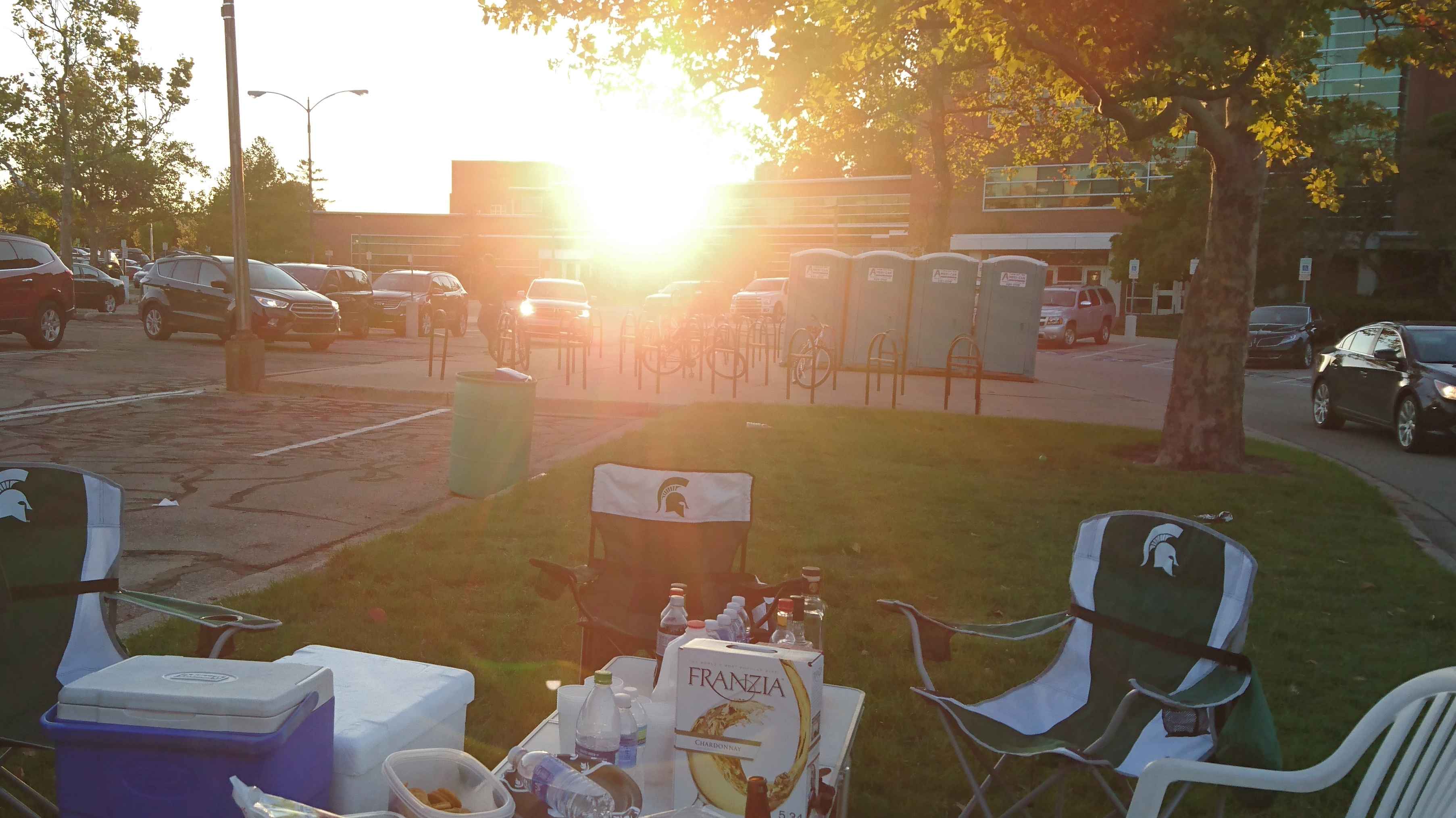 September 2016, during my Study Abroad in East Lansing, Michigan. The story started somehow like this…

I was still irritated, asked myself again and again „What the heck is a – Tailgate – now ?!“

So let´s have a look in the dictionary… Weird entries, but here we go… The Urban Dictionary is always good for American (college) expressions: „Tailgate – Usually found around sporting events, they involve beer drinking and BBQ from the back of a pickup truck or SUV. „

Mhm, okaaaay – so far so confused!

To introduce myself, I am not the biggest American Football fan…I would even say – this sport and the stadium atmosphere is kind of lame, it is somehow not mine. But after I had experienced my first weeks in the States and everyone´s passion for college football and again the passion for tailgates I decided to be as open minded as I can to experience a typical match day. My opinion has changed…there are worthy aspects!

I was invited for a „tailgate“ and “to tailgate” (I thought this word is a noun haha) and on the way, from my house towards campus, through the streets of East Lansing, the so-called “student ghettos” (quote from a Lansing resident). During my way, it felt like there were people around in almost every second front yard: Wearing MSU gear, drinking beer, eating food.  I got closer to Campus…more and more people in front of their houses.

Finally, and 5-6 hours before kickoff, I arrived on Campus – I thought “holy shit…what´s going on here? I just wanted to grab a hot dog and beer” – Literally everywhere were tents, people or lemme´ say groups of people! Friends were getting together and having a laaaarge, extended Barbecue, alias picnic, alias take away dinner, alias outdoor camp dinner… Whatever. 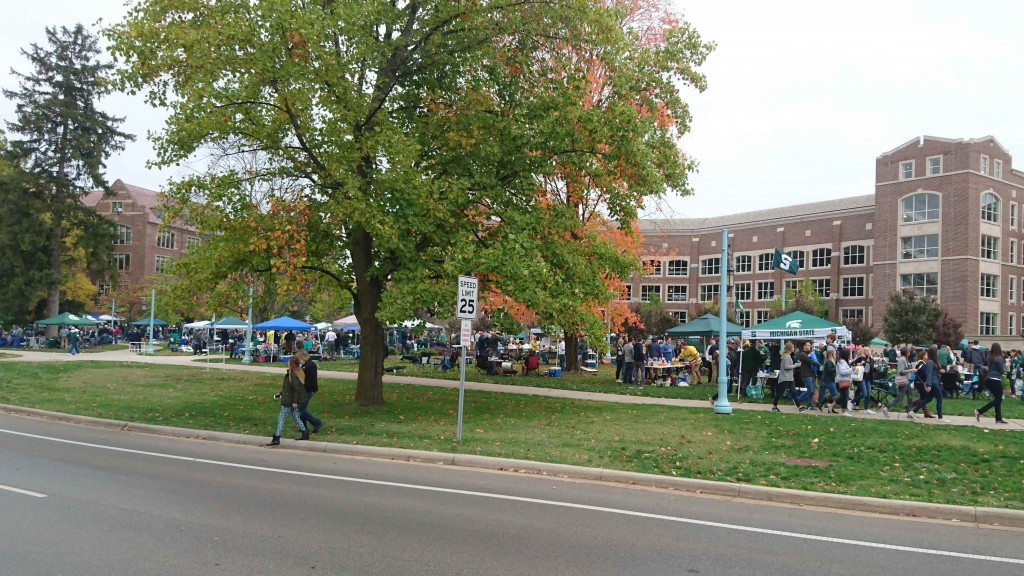 The Food –  A little more than hot dogs

People are preparing fresh burgers and sausages on BBQ grills, some people even on smokers. Others have prepared chili soups, chicken wings or Mac´N´Cheese with them. Green salad, pickles, tomatoes, various sauces and other burger (hot dog or sandwich) ingredients are usually accurately arranged on any SUV tailgate (now the expression makes sense haha). As sides, lots of chips, nachos…. Sometimes coleslaw or fresh corn. Because this is not enough some sweets are necessary. Therefore “tailgaters” set up tables for enormous amounts of donuts, muffins, cinnamon rolls and cookies (in team colors). Drinks are usually beer (some people prefer craft beer; poor college kids are dependent on American light beer, me likewise), wine and cold or warm (that is really necessary during late fall) apple cider. 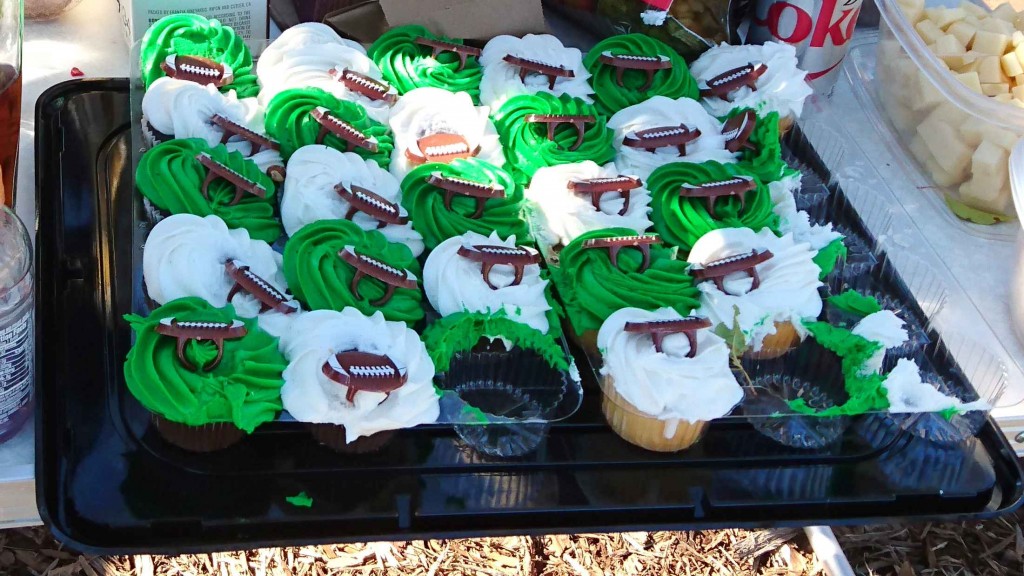 So, I arrived on campus, still searching for my friends. The amount of people overwhelmed me, also I was not very familiar with my new environment, the Michigan State campus. I asked some people in middle of campus for help, for orientation to find the parking lot I was sent to. MSU alumni’s – of cause, they were familiar with almost every single parking lot they had been tailgating for years. They gave me the direction advise “but hey – you don´t wanna a beer, where are you from, France… Germany? I here an accent kinda […].”

And we ended up talking about traveling in the US, hiking paths in the Appalachian Mountains, sports & food culture in Europe and why American Bratwurst is not authentic. Meanwhile we were having a few chicken wings from their self-made smoking grill and 1-2 cold drinks. 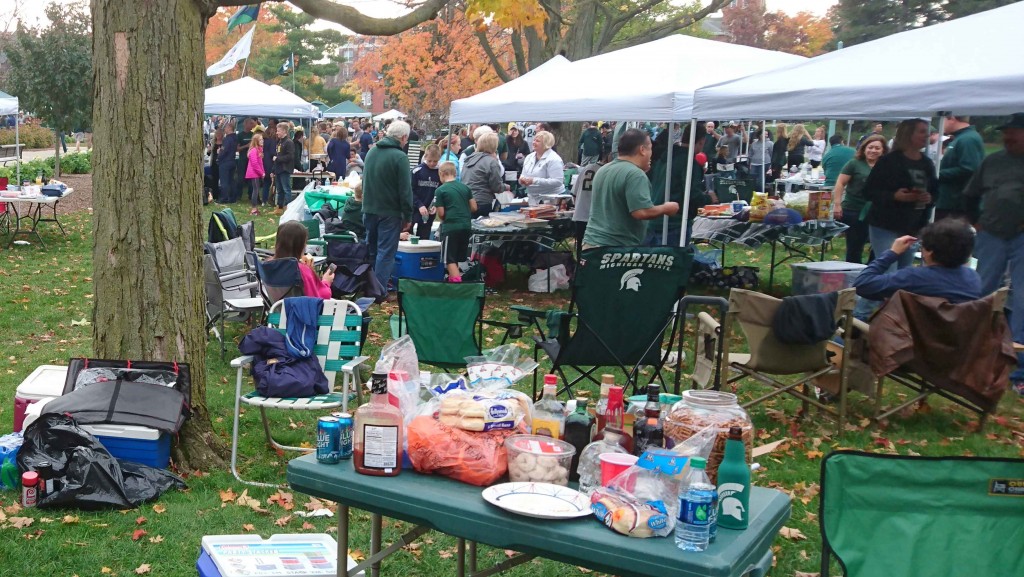 After 2 hours, I reached finally the planned tailgate of my classmates… Food was easier presented, not that accurately like the alumni section but still good and more than enough haha…

Again, conversations about all the world and his wife, connecting new people, having a good time. Friends were offering me a last-minute ticket but I thought „mhm it’s getting chilly, I just watch it in the bars…“ 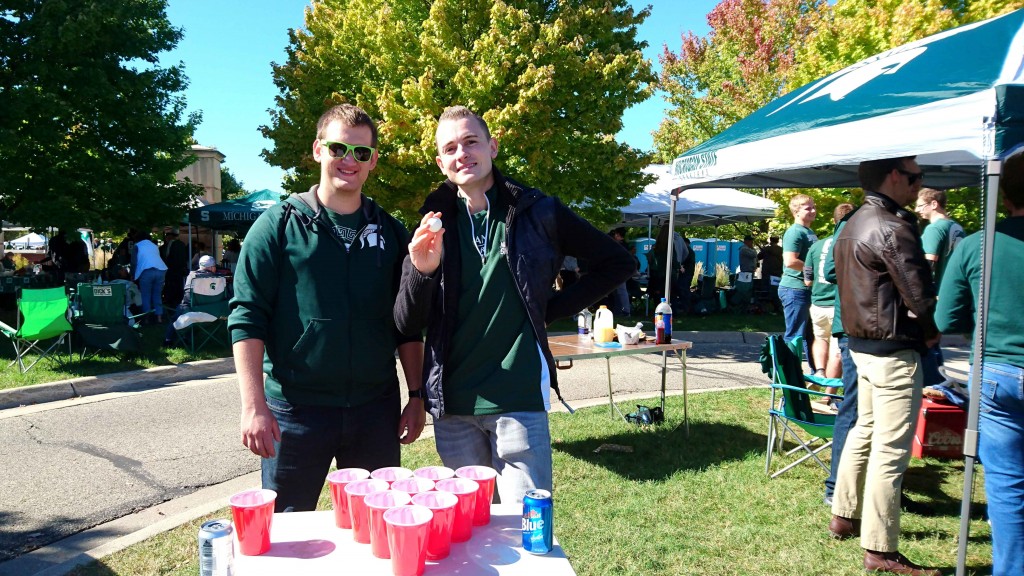 Normally it’s a 15 minutes’ walk across campus back to the downtown area, but it took me 5 hours and the whole match. I was fascinated seeing all the left tailgating spots and pretty much everywhere were some people taking care about the unavoidable mess of the previous hours and listening to the game in radio. I was taking some pics for my memories and suddenly I saw a nicely arranged truck tailgate.

Of cause, I needed a foodie and got in touch with the „rest of the tailgate party“ – 6 people of 2-3 different generations living in 5 different states of the US today but had found together somehow based on their similar degree and associated alumni events. What a constellation. I was curious about their stories and – of cause – they were excited about my European perspective. Firstly, explanations about the upcoming college Football season and MSU insiders, but after a few minutes it led again to an endless discussion about different cultures, politics, society and daily challenges & habits in the US and Germany. So interesting… 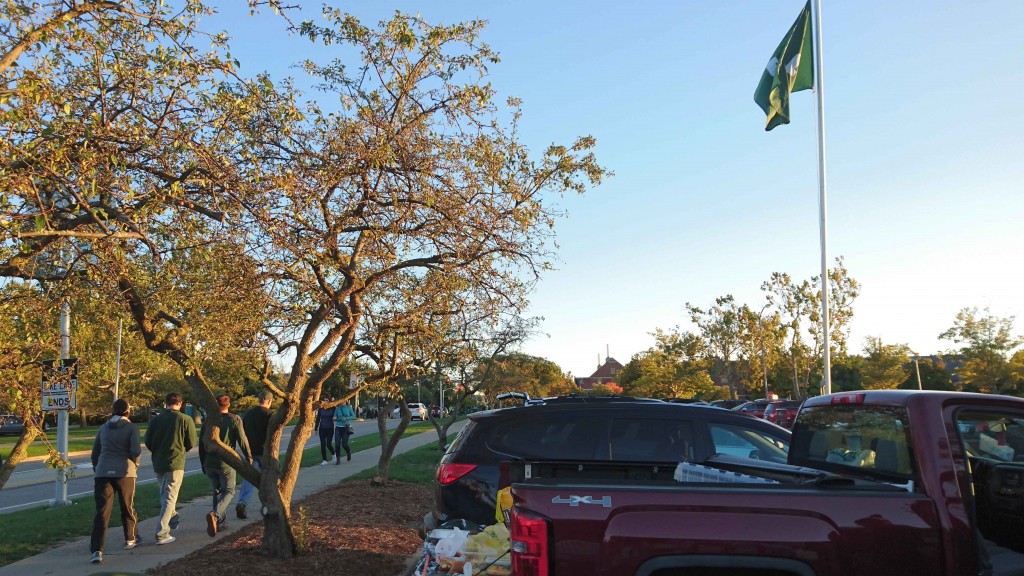 Tailgates were one of my best experiences in the States. If you resist playing drinking games and that sand sack game (cornhole?!) all the time it’s a cultural hot-spot for everyone linked to MSU (or even any other University, which is not University of Michigan) to meet your friends, meet new friends, your old college friends and whoever.

At the same time, you are enjoying lots of food and drinks, what do you need more?  If I had the chance, it would be the perfect spot to try out new BBQ recipes, sweets, bakery stuff. Just to serve my friends and whoever feels invited a pleasure. I miss this environment every second/third Saturday morning and noon.

Also, I missed my last tailgate opportunity in November, maybe a signal to make good for this occasion some day. 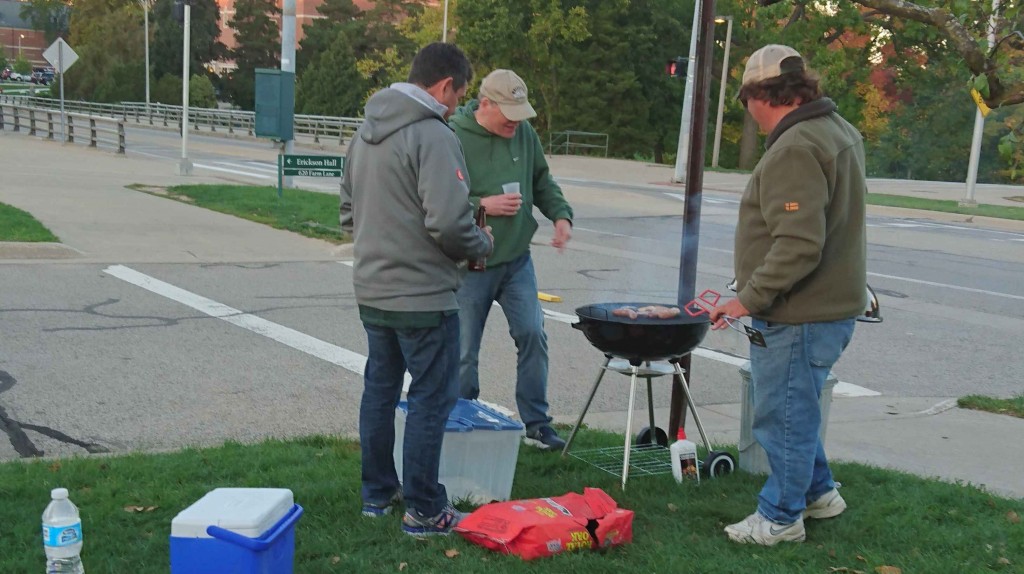 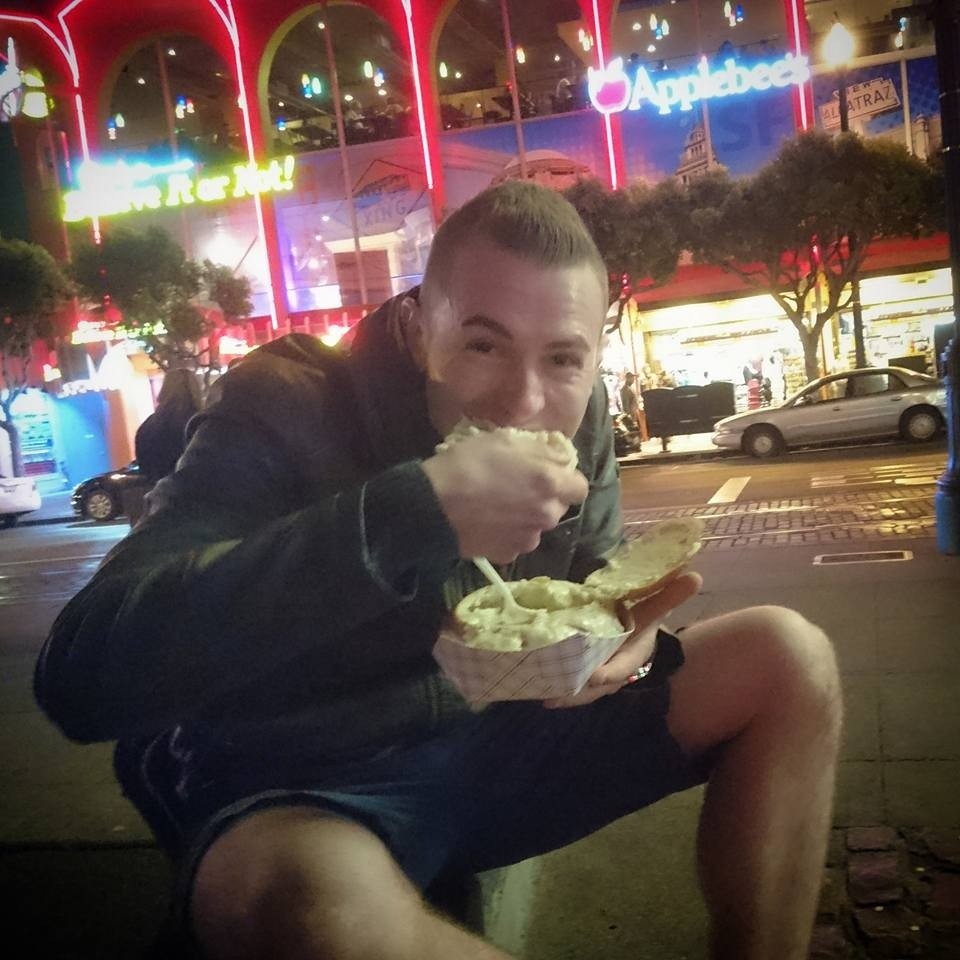